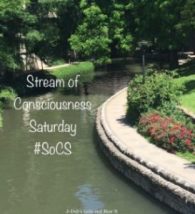 To be clear this post is not to offend anybody it is simply my perspective for this post. A little funny before you read – please be sure to find the TelePrompTers in the picture. 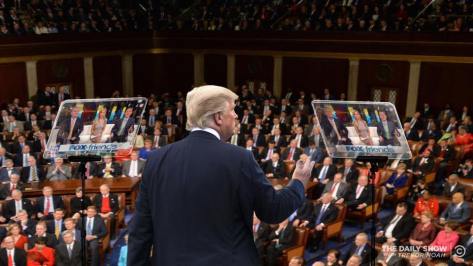 So as I have sat here this morning trying to determine what I wanted to write about, I decided to read the full transcript of the 2018 State of the Union Address that was delivered January 30th by the current occupant of the White House. It hit me, let me a few things from the address and on flip side provide the “in other words”.

Let me first begin with the obvious – anyone who has ever heard man this speak or read his tweets knows how extremely narcissistic he is. So in the address he states over and over  “we have done this, this and this”, however in other words he is really saying “I have done this, this and this!” I do not like him but I do follow him on Twitter so that often I can remind him it is not about him nor is he solely responsible for all of the good happening in America right now.

Next let’s talk about these next two claims for which his administration is taking full credit for.

Since the election, we have created 2.4 million new jobs, including 200,000 new jobs in manufacturing alone. After years of wage stagnation, we are finally seeing rising wages.

In other words let me continue to take full credit for any job growth. The graph above comes from the US Bureau of Labor Statistics. First he can not claim job growth from the election, he did not take office until January 20, 2017 in essence reducing the number of jobs created from his quoted 2.4 million to 1,762,000 jobs from February 2017 through January 2018 with December and January being preliminary numbers that will likely change. Furthermore job growth has been for the most part steady since 2010 with a couple of tough years in the space of seven years.

Unemployment claims have hit a 45-year low. In other words this statement does not take into account those folks whose claim years have run out or have denied because they do not meet the criteria and follow the guidelines set out for each state.

The next statement is “The stock market has smashed one record after another, gaining $8 trillion in value. That is great news for Americans’ 401k, retirement, pension, and college savings accounts.” While yes, the stock markets has surpassed record gains, it begin with this president. The stock market has been on a very steady increase for the last seven years as well after the Great Recession. Again the stock market has nothing to do with one individual president waving a magic wand. As of this writing the Dow Jones closed with after the worst week in trading with a 666 point drop on Friday 2/2/2018, I wonder if the current president will take credit for that? In other words don’t put all your eggs into one basket because nothing is a sure thing in the markets or otherwise.

So to every citizen watching at home tonight — no matter where you have been, or where you come from, this is your time. If you work hard, if you believe in yourself, if you believe in America, then you can dream anything, you can be anything, and together, we can achieve anything. In other words, it does not matter to me that this country was built by the blood, sweat and tears of immigrants. In other words, it doesn’t matter if you were brought here by your parents as children from Mexico or other Latin American countries – you will be headed home and out of the US. In other words if you are not a Protestant White male individual – you are the least important people in our nation.

Here tonight is Preston Sharp, a 12-year-old boy from Redding, California, who noticed that veterans’ graves were not marked with flags on Veterans Day. He decided to change that, and started a movement that has now placed 40,000 flags at the graves of our great heroes. Preston: a job well done. In other words, this is not a completely true account. Perhaps in California they have not made changes to the state policy to adhere to the federal policy that changed in 2011 which is why flags were not placed on Veterans Day.

From the Knoxville News Sentinel on March 5, 2011 “U.S. Veterans Affairs Secretary Eric K. Shinseki announced recently that the federal government is reversing a policy that had dictated that flags could be on display on veterans’ graves at national cemeteries only during the Memorial Day holiday.

Flags will now be allowed on gravesites on Memorial Day and any other day of the year, on a case-by-case basis. A written request to place the flags must be submitted to the cemetery director at least 30 days in advance.

“There was no logic behind the original rule, and I think everyone realized that from the beginning,” said U.S. Rep. John J. Duncan Jr., R-Knoxville.

Duncan sought the change in the federal policy last November after volunteers who place flags on graves at the East Tennessee State Veterans Cemetery in Knoxville reported the state had told them they would no longer be able to do so on Veterans Day unless the federal rule was modified.”

In other words I don’t even know the true policy regarding flag placement on veteran’s graves.

We are defending our Second Amendment, and have taken historic actions to protect religious liberty. In other words, it does not matter how many senseless killings and mass shooting happen in the United States – we will never make any changes to our gun control laws and we will protect our citizens from those who have right purchase any type of firearms. By the way the 15 word statement above was his only mention of guns.

We have ended the war on American Energy — and we have ended the war on clean coal. We are now an exporter of energy to the world. In other words, I don’t know what the in the heck I am talking about as usual. You see based the two articles linked here, one from the U.S. Energy Information Administration and the other from the Bureau of Labor Statistics titled Beyond the Numbers Global Economy we have been exporters of energy for a very long time!!!

I just want to remind folks who either did or didn’t vote for this man, either did or didn’t watch the State of the Union Address that none of the 5,145 words of this speech were his. I guarantee you if he was able be himself – we would seen and heard a different story. This country is a GREAT COUNTRY – but we need everybody to step it up and do their part to keep it great and also ensure we do not allow another clown to occupy the White House again!!!